Reverend Jack Delane Turner and Reverend Tammy Lynette Turner are licensed ministers through the Assembly of God International for the past 12 (twelve) years. We are ministers that are very involved in many areas of our community and surrounding states like Washington, DC. We are involed with, and help Evangeelist Gerald Mayhan with the homeless Ministry at the 2nd and D Shelter (CCNV) And Street Ministry for the past 20 years. We have seen and had the privilege to see thousands come to know Jesus Christ as their Lord and Savior.

Reverend Jack and Reverend Tammy Turner have undertaken the call to the Grant County Rehabilitation (Nursing Home Center) Petersburg, WV to do all Wednesday night serves to bless the men and women of that facility for the past 5 years to this date of December of 2018 and will continue to unless God direct otherwise.

Reverend Jack is an overcomer of drug addition which took his life down a road of trouble for 15 years till the point of self-destruction, to a point he was so overtaken by the dependency of drugs that he broke into a doctor's office to get his drugs. To no surprise God had a plan for his life beyond that. Jack spent one year in jail at the Eastern Regional Jail to await his fate. The court sentenced him to 3-30 years in Huttonsville State Penitentiary. Upon completion of a drug count, he was blessed to get the opportunity for probation of 15 years. jack completed it and was released early, to God be the Glory. Today he is set free by the glory of God and a licensed minister of the gospel and being used for the glory of God. Jack was and is set free from the bonds of cocaine, acid and alcoholism. One night in a little county church his wife was just about ready to leave him, to his not knowing he surrendered all to Jesus. His life has never been the same. Reverend Jack is using his gifts to witness to the drug addict where most ministers won't go today; into the meth house, hotels, streets and whereever he is called. Reverend jack Reverend Tammy have a heart for God's people, the drug addict and the hurting.

They have been very successful in the calling in this area. Wherever God sends us, we will go, for the Glory of God.

Reverend Tammy is a prophetic and anointed woman of God. God uses her in many areas in prophetic ministry. She has a gift from the Lord to speak things over people's lives that the Lord tells her to speak too. She has laid hands on the sick and miraculously they have been healed by the Power of God. Reverend Tammy has preached at women's conferences, churches and park events for God's glory along with the nursing homes which she and Reverend Jack won Special Volunteers of the Year 2017. Both Reverend Jack and Reverend Tammy have been called to churches that are struggling and cannot afford to pay them. They still go without any regrets. Their talents this day are still blessing people with the sharing of the gospel of Jesus Christ.

Reverend Jack and Reverend Tammy are totally funded by donations from area sponsors and people like yourself. 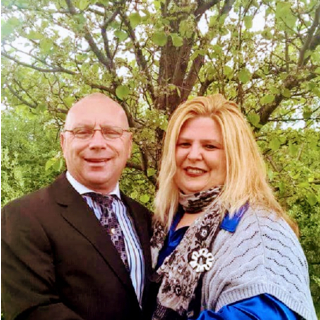